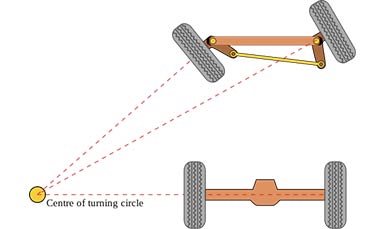 Posted at 11:41h in Mentoring, Trainings by rabab
Share

When designing a control scheme for the Ackermann steering, you have two motors; one is used for drive, the other is for steering. So the drive and the steering are separate.

Usually, for controlling a vehicle you implement some sort of joystick to enable intuitive control as the one shown in the figure. These joysticks are usually formed of two variable resistors fixed perpendicular to each other and by changing the stick position, the adjacent resistor value would change.

The problem arises when we try to implement the following chart in code, as I already mentioned before the Y-axis controls the motion forward and backward using both motors and the X-axis controls the rotation which also needs both motors. Implementing such a chart to directly code is really a big mess (and I’ve gone through it many times), there will be a lot of IF statements with thresholds, a real mess, and I don’t like my code to be a mess. So I had to think of something to simplify the implementation and use as less code as possible.

First, I had a thought about rotating the joystick by 45 degrees, and using the newly rotated axes to Â control the motors by assigning each axis to a single motor as in the following chart. So the green lines represent the new axes after the rotation, assuming the positive ends of the axes are pointing upwards. This simplifies the implementation a lot as every motor is a directly assigned to a single axis.

This solves the code complexity problem for me, but still raised two other problems.
First, what if the remote control is already fixed like the one in the image and you can’t rotate the joystick easily?

Second, In most joysticks, the tension on the X-axis and the Y-axis are not identical, this means that moving the stick upward will not be easy as it will always tilt towards the axis with less tension, making it harder for the pilot to control the vehicle.

To solve those problems I had to get back to the basics :p

I thought about axes rotation

Using these formulas, I no longer needed physically rotating the joystick, hence solving the last two problems, as I will mathematically rotate them.
Implementing the formulas, the
X & Y variables represents the reading from the X & Y axes consecutively, X’ & Y’represents the signals to the left and right motor, and theta should be 45 degrees or PI/4.

But that’s not all, if you’ve worked with a differential drive platform before you’ll know that when moving the forward the slightest difference between the motor speeds will cause the vehicle not to follow a straight line.

By implementing the formulas I’ve just explained, this can easily be fixed using an additional variable resistor to correct the angle (theta) ?

That’s all for now, I hope this helps you in anyway.